🍻 SAVE BIG ON SHIPPING WHEN YOU BUY DECOR BARRELS IN BULK! 🍻 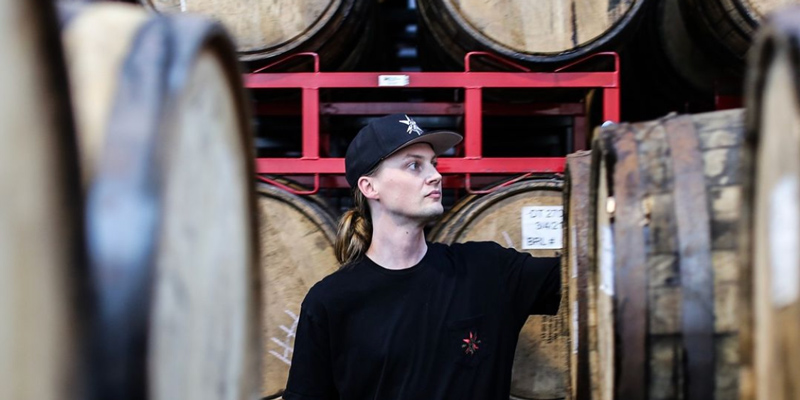 Marty Scott, head of barrel-aging at Revolution Brewing in Chicago

Midwest Barrel Co. is lucky to partner with some of the best in the barrel-aging business. We’ve worked with everyone from the skilled homebrewer to some of the top names in the craft beer industry.

One of the best parts about getting to partner with folks who have a ton of experience with barrel-aged beer is talking with them about how they do what they do. So, we were absolutely thrilled when Marty Scott (@revbarrels on Twitter, @martystyle84 on Instagram), who oversees Revolution Brewing’s barrel program, agreed to answer some of our questions about barrels and beer.

At first we were going to turn our conversation into a typical blog post, but Marty’s responses to our questions blew us away! This dude just knows beer – and barrels! We decided a Q&A would be so much better and do Marty’s answers way more justice. An intro to Revolution Brewing

Before we get to our Q&A, though, you should know (if you don’t already) that he and the rest of the folks over at Revolution in Chicago know what they’re doing when it comes to beer, especially the kind that spends time aging in barrels. Revolution is one of MWBC’s top partners and we love working with them!

You don’t even have to take our word for it. Look up the best barrel-aged beers and you will frequently come across some Rev brews. One of their beers, Deth’s Tar, is commonly on many top lists for best barrel-aged imperial stouts. There are some very tasty Deth’s Star variations, too! Honestly, though, every time Revolution throws beer in a barrel, the result is the same: amazing. They’ve got some incredibly loyal fans who go above and beyond to get their hands on new releases, such as this year’s V.S.O.J., a blend of four barleywines that was aged between 18 months and five years inside bourbon barrels.

This year’s V.S.O.J., which is short for Very Special Old Jacket, sold out in less than an hour when it was released July 13.

Q&A with Marty
from Revolution Brewing

Needless to say, we’re excited to give everyone a peek inside the mind of a top barrel slinger like Marty. In some cases, these answers have been edited for clarity.

1. Why does Revolution partner with Midwest Barrel Co.? What has made this partnership successful from Revolution’s perspective?

​​If all Midwest Barrel Co. did for Revolution’s Deep Wood Series was supply barrels that didn’t leak or infect our beer that’d be enough – and so it was in 2017. An unwavering commitment to customer service certainly hasn’t done much to dissuade our patronage, but of the multitude of reasons we trust Ben and his team’s lumber above all others’, there’s really just one that matters – outcomes.

Not having to sweat the integrity of each and every barrel that crosses our receiving dock has allowed us brewers to focus on the important stuff: brewing, aging and blending the most compelling barrel-focused beers possible. We’ve purchased around 7,000 barrels since we opened our production brewery on Chicago’s Kedzie Avenue in 2012. Most have been from MWBC.

Most of the others should have been. 2. How has Revolution used barrels purchased from us? What kind of beers have those barrels aged?

Nearly all of the barrels we’ve aged have been within the Deep Wood Series, hefty English styles primarily barleywines, porters, stouts and the like.

These beers are all cleaned up and as ready for enjoyment as possible when they instead go to barrel for a nice, long rest – in many cases for several years.

3. What is Revolution’s approach to barrel aging? How does your barrel-aging program decide what types of beers to age, how long they need to be aged, when to release them, etc.?

Within the Deep Wood Series, we aim to design and execute thoughtfully balanced beers delivering as much barrel and malt intensity/complexity as possible – and then some.

They are unapologetically barrel-aged. Long rests in young, expressive barrels more or less guarantee this. We brew early and often to make sure we have enough unique, fully-developed components to blend when we need them. “The barrel remains the star.”

Almost every barrel filled is done so with a beer that was designed for barrel aging; there's very little "we should put some of this in a barrel" around these parts. Standard metrics like malt sugar and alcohol content more or less define how each beer “drinks,” but each is made complete by the confluence of wood extraction and malt development over time. Few things are more satisfying to us than pulling cherry, vanilla, coconut, graham and the like from wood rather than employing a menagerie of sugar-laden adjunct additions. More and more, we've allowed ourselves to be playful in that respect, too, but in every case, "the barrel" remains the star.

Even though we now release these big beers pretty much all year, the main season is, and perhaps always will be, within the cooler months. Each fall and winter we release as much volume and variety as we can supply. Typically 80% of our Deep Wood Series volume and variety are loosed upon our customers between October and January. Today that's roughly 10-12 unique packaged brands totalling some 1300 Bbls or about 900 oak barrels, as well as dozens of often hyper-barrel-focused draft-only musings. The other handful of always-rotating brands totalling roughly 250 Bbls or 150-200 oak barrels are released in smatterings throughout the remainder of the calendar.

Each brand for the most part is blended with just the right amount of several disparate components to ensure balance and complexity. Each barrel is aged as long as we can afford -- typically no less than ten months and in extreme cases up to five years

4. How much planning does barrel-aging beer require?

There’s no one correct way to do this sort of thing. Our approach, more like wine making than typical beer brewing, requires loads of planning -- often years in advance.

With our Very Special Old (VSO) beers, we adjust our target finishing gravities to maximize the impact of those extra months (or years) in oak, and we’re typically on the lookout for the most expressive and sometimes even “cool” barrels to fill with them.

But planning for a singular outcome can expose you to all sorts of risk, so we plan for a variety of outcomes and potential changes in desired release volumes, timing and even the odd brand which pops up on the calendar as a “release of opportunity.”

In short, we plan obsessively so as to be as flexible as possible for those times where we do need to be nimbly reactive. Today we spend far more time planning the Deep Wood Series than we do executing it (unless of course you count the aging itself).

5.What does Revolution look for in a barrel?

Special cases aside, we only purchase barrels that are guaranteed not-rinsed. This is simply a matter of microbiological stability. After that, it’s great to have barrels that don’t leak. It’s more fun to make, sell, and drink beer than it is to mop it up.

Lastly, we look for barrels which will provide the intensity of flavor we’re trying to match with our malt-derived efforts. Old barrels with cool stories are more often than not just old barrels with cool stories. They’re great for a label or a menu, but they pale in comparison to their more youthful counterparts which have enough life left in them to be as dynamic as our big beers over the course of years of aging.

Of course, if you can score a few older barrels that are positively sopping wet with world-class hooch, you’d be mad to pass them up. Those barrels have given all their goodness to whatever they aged, and those flavors concentrate as they age longer and longer. If you can’t recover the essence of the barrel from the liquid – as is the case with dry barrels – then I’m sorry to say that old barrel’s likely just a cool story. In terms of our barrel aging processes, I’d again say we’re more like wine makers than brewers. These big fermentations are notoriously difficult to control, which wreaks havoc with plans, not to mention product consistency if left unmitigated.

In the last few years, we’ve taken to intentionally producing batches of beer which are either far too sweet or far too dry, and blending them back together based on where they landed rather than where we thought they would. This turned the liability of inconsistent fermentations into an unbeatable control measure. It’s granted us tighter control over our complexity metrics as well, but that’s a whole other conversation.

Everything is balanced and approachable.

Outside of barrel operations, Revolution is a modern melting pot of a brewing company. As the largest independent brewer in Illinois, we have certain production assets that smaller operations typically can’t access, such as a wet mill, dual brewhouses, modern high-speed canning and 800 Bbl fermentation tanks just to name a few. Limiting the scope to just production staff, we have a long-seasoned team who cherish classic styles and techniques, but don’t shy away from some of the more contemporary products which seem at times to pervade the modern beerscape.

Even when we’re doing something new-to-us, we’re still doing it like Revolution. Grab any selection of Rev beers from your local retailer’s cold box and you’ll get it. Everything is balanced and approachable, even when it’s “extreme.”

Where to find Revolution beers

How’s that for dropping some knowledge? Hope you took notes – or at least bookmarked this blog post!

Thank you so much to Marty for the time to answer our questions and to him and the Revolution crew for being such awesome partners in the barrel business.

By the way, Marty, we can’t wait for you to write the definitive book on what brewers should look for in a barrel. If anyone should write that book, it’s you!

For those reading this that may not have had the opportunity to try some of Revolution’s offerings, here’s where to find their beer.