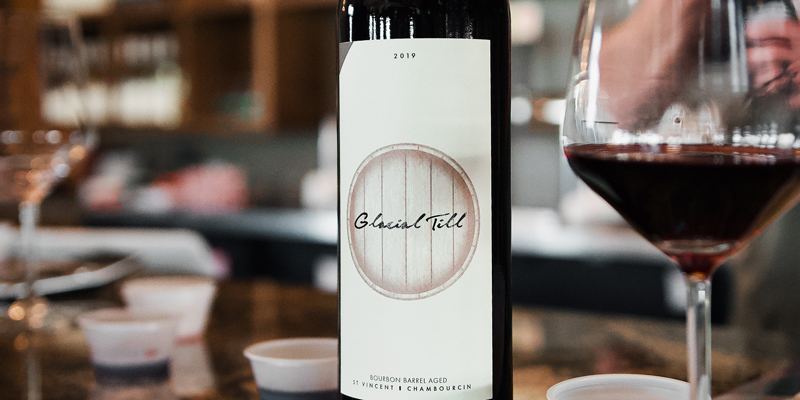 The winemakers at Glacial Till Vineyard and Winery enjoy their craft, but they aren’t satisfied with making the same wine year after year.

That’s one of the reasons why Glacial Till, located in Palmyra, Nebraska, continues to churn out flavorful varieties of the hard apple cider it started making in 2015 in addition to its lengthy list of wines. The itch to innovate didn’t end there, though.

Glacial Till and Midwest Barrel Co. have crossed paths continuously over the past several years in the Nebraska grape and wine space. Ben Loseke, Midwest Barrel Co.’s CEO, is not only our resident Barrel Ben, but also works as a grape expert in the University of Nebraska’s Viticulture program. So it seemed fitting for Ben and John Murman, COO of Glacial Till, to strike up a friendship over their common interest for all things grapes and wine related. As Glacial Till has expanded their product line beyond traditional wine making, Loseke has been stoked to partner with Glacial Till as they try new things: bourbon barrel-aged wines and ciders. “Winemaking is so cut and dry,” said John Murman. “You grow the best grapes, don’t screw it up and then hope nothing happens. And then you make a good wine.” Cidermaking is different, Murman said. It’s more like brewing craft beer, where there’s a lot of room for experimentation.

As for aging wine in a bourbon barrel, that’s a little more out there.

Wine already has to mature in oak barrels so its flavors can develop, but the barrels typically used for winemaking are American or French oak barrels that are either new or have aged only wine before.

Not yet, at least.

The idea was new to Nebraska – until Glacial Till gave it a go.

How Glacial Till got started
with barrel-aging

Glacial Till cider maker Adam Anderson, who has also worked on the wine side of the operation, knew about larger wineries, such as 1,000 Stories, that barrel-aged wines. He enjoyed the taste profiles of those wines.

So, when Glacial Till had a batch of wine that didn’t really have an end plan, Anderson decided it was time to go a different route.

Already a fan of bourbon itself, Anderson decided to take on the barrel-aging project.

About a year later, Nebraska’s first barrel-aged wine was ready. “I was shocked to hear that no other Nebraska winery was barrel-aging,” Anderson said. “So that was kind of a fun surprise.”

The wine was a hit with those who got the chance to try it.

That the wine tasted great was what mattered most, not so much that it was the first of its kind in the state.

“We kind of just go along with whatever we think would taste good,” Anderson said. “We’re not too worried about if it’s been done before.”

Glacial Till has a couple of bourbon barrel-aged options.

In the wine category, there is the special release Bourbon Barrel-Aged wine that is available at times throughout the year.

As for cider, there is CORE, a special cider that spends 12 months aging in Willett bourbon barrels for a complex flavor profile of caramel, hazelnut and fig.

What’s next for Glacial Till?

We were wondering the same thing! Stay tuned for the full series on this customer spotlight as John Murman and Adam Anderson share their thoughts on all things barrels, where they get their inspiration and how they handled the COVID-19 pandemic of 2020. Have a good barrel story?

Midwest Barrel Co. is much more than a barrel shop. We believe every barrel has a story, one that continues as soon as it reaches its next destination.

Help us tell each barrel’s story. Get in touch and share your barrel-aging tips and successes.